Projects Past and Future 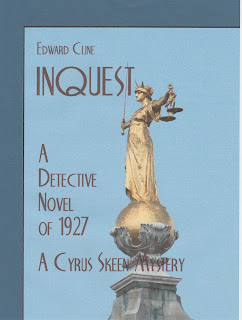 I am taking a break from the news – real and fake, and from Islam, especially – to move to a new location and to catch up on reading, writing, and research. The moving chore should be completed by the end of July. One thing I will have made progress on (which I didn’t expect to make) is my next Cyrus Skeen novel, the 27th, Inquest, set in San Francisco in 1927, a few years before the events in China Basin, the very first Skeen detective novel, set in December 1929. I have settled on the cover for Inquest and completed a hand full of chapters. The story deals with how a local county district attorney of the Progressive persuasion attempts to scuttle Skeen’s career, after Skeen has killed a murderer in self-defense who was trying to murder him, fails, and takes more direct action, and also fails.

His enemies are not necessarily common criminals, but rather ambitious society managers (usually academics from prestigious universities) such as Progressives and other collectivists. Some of the latter organize civic campaigns to have his license revoked and Skeen run out of town. Some of these characters are religiously fanatical, not above using genuine thugs to put him out of business; others are money-grubbing hypocrites, such as the principals of a convent who hire their novices out to the rich man’s bordello next door. Another respected outfit rescues orphaned girls only to sell them into sexual slavery. Skeen exposes and defeats them all. But in each title there is an overt political theme that I convert into initial confusion for the protagonist, the detective, until he discovers and resolves the anti-moral premise. In one title, The Black Stone, he runs smack into the early agents of the Muslim Brotherhood when he investigates some particularly horrific murders and mutilations. Not even the BOI – the Bureau of Investigation,  the early FBI – had heard of Islam or the Brotherhood.

Skeen will not yet have met the love of his life and his future wife, Dilys Jones (an artist whose ambition is to paint nude portraits of many famous and infamous women in history), or any of the other regulars in the series: Lieutenant Patrick Donovan Skeen’s friend and his chief contact in the San Francisco Police Department; Mickey Kane, the top reporter of the Observer-World; Valda Redfern, a fashion model and Dilys’s favorite model; Lieutenant “Manny” Raggio; Maud Skipton, the Nob Hill socialite; and others.

I have one other detective novel series of four titles to which I do not plan to add new ones; it is a first person narrative featuring Chess Hanrahan, a private detective in contemporary New York City who takes on cases he calls “paradoxes.” It is published by Perfect Crime Books in Baltimore. There is the three-title suspense series, beginning with Whisper the Guns, starring the American entrepreneur hero, Merritt Fury, which chronicles his conflicts with the government (more specifically with the U.S. State Department, and in Whisper the Guns his struggle with the Mainland Chinese government in Hong Kong.

My magnum opus, however, is the six-title series, Sparrowhawk, which dramatizes the origins of the American Revolution between 1745 and 1775. A seventh title is the New Sparrowhawk Companion, which contains a guide to the hundreds of characters, to the language, and to the historical facts underlying the Revolution. It tells the story of two Britons from their formative years to their adult maturation, one from the Cornwall peasantry and one from the aristocracy. Both become American patriots. The original publisher, MacAdam/Cage Publishing of San Francisco, went out of business years ago, when its founder died, his successors declaring bankruptcy and bilking most of its stable of authors out of their royalties. I found it necessary to republish the series myself, under the Patrick Henry Press imprint, unwilling to see it fall between the cracks of literary achievement and success. I had to fight another publisher for the e-book rights for years, and finally was able to reclaim them. The series therefore has been in continuous publication since 2002. It, together with titles from the other series, has enjoyed unremitting sales as print books, on Kindle, and as Audible books.

I managed to complete six Skeen novels and several Rule of Reason columns while in this hot Texas town, which I have grown to loathe. I expect to accomplish much more in my new “digs,” which I have been promised to be far more salubrious environment than Texas.
Posted by Edward Cline at 11:28 PM No comments: Links to this post