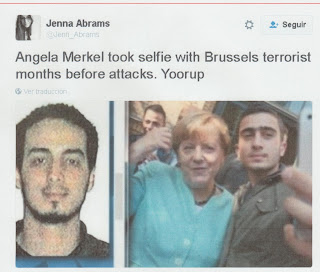 Our “Destiny”?   As Europeans? Angela Merkel’s brain is on some kind of drug. Perhaps she should also lay off the quart-sized glasses of Bavarian suds.

“The times in which we could completely depend on others are on the way out,” Merkel said during an appearance at a beer tent in Munich on Sunday. “I’ve experienced that in the last few days.”

“But we have to know that we must fight for our future on our own, for our destiny as Europeans,” she added.

Oh, yes. The plentiful times when Europe could mooch on the U.S. are past. But is Europe’s future to be a European one or an Islamic one? Germany and other European governments want to ensure that the transition from European to Islamic submission is smooth without any speed bumps that would frustrate the conquerors.

The German parliament is debating a proposal to force social media platforms to either delete hate speech quickly or risk hefty fines.

The problems that many critics point out are the vague definitions of the term “hate speech” and the restrictions that the proposed law may have on freedom of speech. Justice Minister Heiko Maas disagrees, arguing it will only help protect freedom of speech in Germany.

Because, after all, who’s going to hold up all “Refugees Welcome” signs to greet the boatloads and swarms of middle-aged Muslims of virtually every hue and color when they step into your life to  infest your town and city and countryside? We've got to shut the Islamophobes,  malcontents up and make sure they don’t offend our new citizens! Put a premium on their “free speech.” Make them pay, block their speech, delete it! “After all, we, the European elites won’t have to live with the consequences of our immigration policies. We have protection! We live in gated communities. You the hoi polloi don’t! Misstep or one bad word, and you spend a night in the box! Don’t like it? Tough! We're here to protect you!”

They live comfortable and risk-free lives – except for the really dhimmified morons who don’t mind having their daughters and wives raped and murdered:

The perpetrator is a 17-year-old Afghan asylum seeker
The search for the culprit is finally over : A 17-year-old Afghan was due to one belonging to him black scarf, its probably refugee helpers donated bicycle and a black hair, which lay in the riverbed, converted and finally arrested. Its DNA corresponds to that found in the body of the victim. The perpetrator was illegally submitted to Germany in 2015 and was one of the so-called unaccompanied minor refugees. He had already appeared in the context of a fight, but was not deported.
Mary’s parents collected at the funeral for a refugee project
At the end of October, the parents of Maria L., who came from a middle-class academic family, had a mourning display in the FAZ. In this, they wrote that they did not want to get flowers at the burial as usual, but that the mourners should donate money instead: on the one hand for the education work of the Catholic Church in Bangladesh, on the other for the association “Weitblick Freiburg eV”.

The German authorities will not release accurate statistics about the nature and frequency of migrant and especially Muslim crime in that country. Gates of Vienna reported in April 2017,
“Real Crime, Fake News on German Crime Statistics.”

How, therefore, should one assess the statements by the Minister of the Interior, when he issues a blanket denunciation of the entire citizenry of Germany? Fake news? Hate speech?

And, “Muslim Migrants Increase Crime in Germany by 65%” from Front Page Magazine:

German Chancellor Angela Merkel said that the huge number of Muslim migrants flooding Europe and Germany represent an "opportunity". Here's what that opportunity looks like now.

A mass brawl occurred between refugees from Afghanistan and Albania. Some 60 refugees went after one another in the camp in the Wilhelmsburg district on Tuesday evening. Some were armed with iron bars, also witnesses had testified that a refugee had a firearm, a police spokesman said.

In Lower Saxony in Braunschweig there was also an altercation between 300 to 400 refugees between Algerians and Syrians from a dispute over stolen goods.

In the brawl in Hamburg five refugees were injured, one got a wound in his arm and had to be hospitalized. Whether they were stabbed, was initially unclear. The police had deployed a large contingent on site to separate the warring Afghans and Albanians, said the spokesman. 30 police cars were in use…..

Here's what the opportunity looks like. It's an opportunity for No Go Zones. For suicide bombings. For organized crime, constant riots and entire neighborhoods and then cities ruled by Muslim gangs that swiftly evolve into militias just like they do in the Middle East.

Any brawls reported between migrants and white Europeans?  Probably not. White Europeans are not permitted to fight back against their attackers. It’s a punishable offense, because it would be called “racism.” But the elephant under the table is that fact that, no matter if it occurs in Rotherham, Cologne, Manchester, or Paris, Muslims wage their own kind of “race war” against white Caucasians. I don’t think I’m the first to make and express that observation.

So, Frau Merkel, how’s that working out your country’s destiny yourselves working for you? Remember what your selfie pal said:

“The mosques are our barracks, the domes our helmets, the minarets our bayonets and the faithful  our soldiers...” ―Recep Tayyip Erdogan, President of Turkey.

Did you think Erdogan was kidding? Breitbart reported in February 207:

“Angela Merkel claims that the European Union still has a “responsibility” to take in more so-called refugees, and pleaded to Islamic governments to help convince people that terrorism has nothing to do with Islam.”

The 62-year-old German chancellor began her speech by acknowledging that “the European Union right now is in a very difficult situation due to the result of the British referendum … which is very regrettable”.

Germany, France, Sweden, and Belgium and the rest of the European Union need more Morlocks to make things work! So let them emerge from their dank pestholes and grace us with their diversity! Morlocks and the Eloi can dance in celebration around a Maypole….No, wait, dancing and quaffing beer, too, are prohibited in Islam!

Has Merkel ever clinked glasses of Reinheitsgebot with a Muslim after another selfie?

Posted by Edward Cline at 2:42 PM No comments: