Olivia Pierson’s Western Values Defended: A Primer, is just what its title says it is, a primer for those unread in what those values are that need to be upheld and defended. It is a short book, just a general survey of the Western values that are rooted in ancient Greece but which came to fruition in the Age of Reason and the Enlightenment. It is only 71 pages long, but it is loaded with ideas which most people are not familiar with. 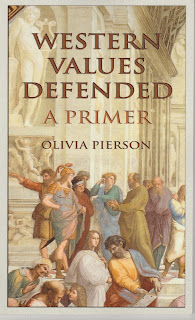 An Amazon review best describes Pierson’s opus: “Olivia Pierson is the author of To Love Wisdom - Gateway to the Heroic for the Young – is an introduction to philosophy for young people aged 10-13 and Western Values Defended: A Primer – a  punchy and relevant overview of the greatest gems of Western civilization, and how they came to define the daily character of individual liberty in the West." She writes about politics, history and culture on her website oliviapierson.org.  A reader wrote, “An exceptionally well-written defense of Western liberal philosophy and culture! At a time when Western values are overwhelmingly menaced, Ms. Pierson systematically explains just what Western values are, and why they're so overwhelmingly important. The West today is massively under assault from the forces of socialism and religion, and Ms. Pierson persuasively and passionately explains how we all can -- and must! -- fight back against the horrifically threatening darkness.”

For any well-read adult who is conversant in the issues covered by Pierson, her book is “old news.” What they must remember is that it is an introduction to those issues. It would make an incomparable text book in elementary and high school as an antidote to the government-mandated multicultural pap being taught in schools today (at least in the U.S.). She introduces the issues in an elegant, compelling style, one which “old hands” on the subjects will find attractive and informative (I learned a few things about some of the issues I’d not encountered elsewhere). It was difficult for me to choose my favorite chapters in Western Values Defended: “Religious Tolerance” (which includes a moving and much-earned tribute to Hypatia of Alexandria, horridly martyred by early Christians because of her mind), “The Emancipation of Women and Sexual Freedom,” “Freedom of Speech and the Press,” “A Commitment to Scientific Inquiry,” or “Capitalism and Innovation.”

Pierson lays out quite clearly to what Western civilization owes its origin and continued existence: his mind, or his rational faculty. Man is the only animal that can change and better the conditions of his existence, by changing his environment, and he can do that successfully by thinking, by using his mind. She quotes Francis Bacon, the 17th century English philosopher, statesman, and essayist: “Nature, to be commanded, must be obeyed.” Another quotation of his that came to mind at the same time was, “Seek first the virtues of the mind; and other things either will come, or will not be wanted.” Pierson demonstrates that when man employs his mind in the furtherance of his life and values, he naturally exploits its potential virtues, and the results are so multifaceted that one could make a nearly endless list of the things that benefit and extend one’s life.

Capitalism has been the greatest life extender in history. Pierson writes: “What people do not seem to understand is that a socio-economic system is itself a moral issue.” (60). It is the only socio-economic system that has a rational basis, ergo a moral foundation. There are other such systems, and every one of them has imposed and perpetuated misery, ill-health, poverty, subsistence starvation, and shorter life spans: theocracies, communism, and socialism, all of which are illusionary and fundamentally anti-mind and anti-freedom and all of which, regardless of their “benign” inauguration in any country, must become tyrannies and dictatorships (if things don’t work as “planned,” it must be the fault of the producers!), not of the proletariat, but of a self-appointed political elite, jealously kept in power with force and the secret police. (See now the state of the “proletariat” in Venezuela, reduced standing in line for hours for toilet paper and batteries and other necessities, the distribution of which the government took over “in the name of the people” and created scarcities. It’s socialism at “work.”Venezuela was once a mildly prosperous nation, thanks to its oil reserves, which the government nationalized and expropriated years ago.) 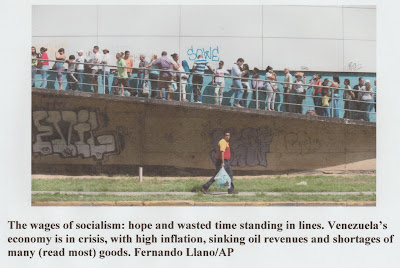 Venezuela was one of the original founders of OPEC). Any government that assumes the role of wealth distribution has abandoned reality for wishful thinking. Socialists, Social Justice Warriors, and other collectivists wish to command nature by ignoring it, or without obeying it or even acknowledging that it exists (e.g., the American Environmental Protection Agency).


One of Pierson’s most illuminating chapters is the one on Freedom of Speech, and she inevitably touches on the continuing conflict with Islam, which calls for censorship of any speech that is in the least critical of Islam (and by extension of Muslims) and the fatal punishment of anyone (Muslim or infidel) who dares voice a position on Islam, serious, scholarly or satirical. She writes that freedom of speech, “happens to stop the vast majority of ideological conflicts from spilling over into physical violence.” (p. 44) Muslims can demonstrate and chant “Freedom of Speech Go to Hell” in Britain without being attacked by skinheads but any Briton who tweaks the noses of Muslims in a private email can be charged by the UK government with blasphemy or racism or “incitement” to violence. The British and other Western governments uphold a double standard, favoring Muslims in law but “lawfully” punishing others for saying what is on their minds about Islam.

To prohibit by force or with threats of it from speaking one’s mind is a form of mind-control, and Islam is very good at that, or at least effective. But the freedom of speech to insult the West and call for its destruction has not stopped Muslims from attacking those “guilty” of “offensive” speech. The French publication Charlie Hebdo is not out of the fire yet.

Nor has it stopped our own governments from proposing blanket censorship of all communications that denigrate or “offend” Muslims, even when they are found guilty of the most horrendous crimes. In many cases, Muslims don’t need to resort to violence to shut people up. Western governments, using the power of the state, will act as their proxies by suppressing speech.

Pierson writes, “When any culture provides a robust arena for the fierce competition of ideas to be expressed without hurt feelings derailing the issue, the men and women of such a civilization can only improve, and not devolve.”  What many fail to grasp, however, is that Islam fears such an arena, because it knows it would come out the sorriest, and so it works incessantly to either suppress free speech or get Western governments to do the dirty work for it. For all the violence Islam is responsible for, for the thousands of deaths and indescribable misery it has caused over its 1,400-year existence, Islam is basically an ideology of cowards.

It fears the sunlight of freedom and unfettered speech. So it skulks in the darkness and strikes you behind your back, or while you’re sleeping or soaking in the rays on a beach. Olivia Pierson’s Western Values Defended will help more people, and especially the young, understand that. It will open new worlds to them, such as the treasure trove of Western values, and the cancerous spread of statism and Islam.