Gatestone ran a comprehensive report on the state of Sweden under the press of tens of thousands of immigrants, most of whom who have neither an affinity for Sweden nor a fondness for Swedes, except as prey for rape, robbery, and mayhem. The article, “Sweden descending into anarchy,” of November 13th, by Ingrid Carlqvist, recounts the alarm Swedes are now feeling as the consequence of their government inviting countless barbarians into the country are becoming manifest. The reality of multiculturalism is hitting home, and hard.

But while reading Carlqvist’s article, I couldn’t help but remember that the Somali immigrant who raped a dying woman in a hotel garage, and then proceeded to rape her corpse, won’t be deported after he has served his sentence. Once he’s released, he is sure rape again, and commit other crimes. Why won't he be deported? Janna Brock wrote in 2013:

It was early in the morning of 27 September. Police received an alarm that the two men were having intercourse with a woman who was completely unconscious on the floor of a parking garage under the Sheraton Hotel in Vasagatan in Stockholm.

The man was arrested by police and detained two days later by the Stockholm District Court, on suspicion of aggravated rape. The prosecutor had asked for him to be arrested for murder, but the district court found that the evidence for the suspicion was not strong enough.

The woman had minute traces of alcohol, cocaine, and prescription drugs in her body. But she was not dead at the time of the rape. The Somali Islamist claims the act was consensual. So the man in this consensual act continues to rape the woman after she is dead? This is depraved, but the Swedish judicial system is blind to the truth. They don't see this monster for what he is. Prosecutor Daniel Jonsson cited the death as an "abuse-related accident." Is this some kind of a sick joke?

The Swedish judicial system won't see him as a monster because to see him that way would be tantamount to politically incorrect thoughtcrime. When Prosecutor Jonsson was asked why he would not pursue the illegal immigrant’s deportation after completing his prison sentence, he answered:

When Free Times asked if he, Jonsson, in light of the risk that the 34-year-old will commit more rapes in Sweden, still does not feel he has a responsibility to try and get the man deported, he answered no. “I do not understand why a Somali woman would be worth less than a Swedish woman in this context. He would be as likely to commit crimes there if he was deported.

In short, the life of a hypothetical Somali woman in a pesthole is more valuable to a Swedish prosecutor than the life of any Swedish woman, a fellow citizen. Or perhaps of equal value. The criminal might strike again in Somali. This cowardly prevarication, in practice, represents the nullification of any value, anywhere. We can't deport the savage because he might hurt someone else thousands of miles beyond Sweden’s jurisdiction and realm of responsibility. But, we have an altruistic responsibility to protect everyone, everywhere, even if it is far from the aegis of civilized law.

What makes such a craven absurdity possible is – and I’ve discussed this point in past columns – Immanuel Kant’s categorical imperative to “just do it,” regardless of the cost to oneself or to anyone else. I’ve discussed this in both Parts of “The Mental States of the Political Elite,” in “Pax Germania vs. Pax Islamia,” and “The Know Nothings.”

As Ingrid Carlqvist writes, the Swedes are just now realizing that their government has betrayed them, lied to them, and is unable or unwilling to protect them from the countless predators let into the country to avail themselves of the welfare state Swedes heretofore didn’t think they would need to share with anyone else.

Many Swedes see the mass immigration as a forced marriage: Sweden is forced to marry a man she did not choose, yet she is expected to love and honor him, even though he beats her and treats her badly. Her parents (the government) tell her to be warm and show solidarity with him.

In Sharia law, that’s the Muslim male’s primitive concept of marriage in practice. A wife is mere chattel to be used and beaten at will without consequence. Why should that concept not be extended to a whole population, to a whole country? The Muslim male expects unswerving devotion and service from his wife. Why should not that expectation be extended to all Swedes? Or to all Germans? Or to all Frenchmen. Or to all Americans?

Once upon a time, there was a safe welfare state called Sweden, where people rarely locked their doors. Now, this country is a night-watchman state -- each man is on his own. When the Minister of Justice, Morgan Johansson, encourages breaking the law, it means opening the gates to anarchy. Mr. and Mrs. Swede have every reason to be worried, with the influx of 190,000 unskilled and unemployed migrants expected this year -- equivalent to 2% of Sweden's current population….

And the Swedes are preparing: demand for firearms licenses is increasing; more and more Swedes are joining shooting clubs and starting vigilante groups. After a slight dip in 2014, the number of new gun permits has gone up significantly again this year. According to police statistics, there are 1,901,325 licensed guns, owned by 567,733 people, in Sweden. Add to this an unknown number of illegal weapons. To get a gun permit in Sweden, you need to be at least 18 years old; law-abiding; well-behaved, and have a hunting license or be a member of an approved shooting club. In 2014, 11,000 people got a hunting license: 10% more than the year before. One out of five was a woman.

But, in Sweden, as in Britain, there’s a catch to arming oneself and defending oneself against predators. As a salesman for a Swedish security company relates about the skyrocketing demand for alarm systems:

"It is largely due to the turbulence we are seeing around the country at the moment." People have lost confidence in the State, he added. "The police will not come anymore. Truck drivers say that when they see a thief emptying the fuel tank of their trucks, they run out with a baseball bat. It is no use calling the police, but if you hit the thief, you can at least prevent him from stealing more diesel. Many homeowners say the same thing: they sleep with a baseball bat under the bed. But this is risky: the police can then say you have been prepared to use force, and that might backfire on you." [Italics mine.]

Being prepared to answer force with force can be punishable in a Swedish court? A Swede defending his home or his wife or family risks judicial penalties, but the initiator of force – the burglar, the thief, the rapist – incurs little or no penalty? But Sweden doesn’t have a monopoly on stupidity. A British trucker was nearly jailed in Britain for carrying a “stun gun” in his cab to protect himself from marauding migrants in Calais.

But the Swedish news media and government will also punish those who speak out against the invasion of countless barbarians. Their policy is to cover up the dire seriousness of the crisis, so that their subjects can live in the same Fantasy Land. In Germany, if they can't cover up the resistance to Angela Merkel’s policies, they shut it down with raids. As in Germany, the Swedish police are complicit in the cover-up of rapes, robberies, and terror Muslim gangs commit regularly.

Carlqvist goes on:
Even before the massive influx of migrants in the fall of 2015, Swedes felt a need to protect themselves -- and with good reason. Since the Parliament decided in 1975 that Sweden should be multicultural and not Swedish, crime has exploded. Violent crime has increased by more than 300%, and rapes have increased by an unbelievable 1,472%.
The politicians, however, ignore the people's fear completely. It is never discussed. Instead, the people who express concern about what kind of country Sweden has become are accused of xenophobia and racism. Most likely, that is the reason more and more people are taking matters into their own hands, and protecting themselves and their families to the best of their ability.

But the highlight of Carlqvist’s article was this revealing gem uttered by Sweden’s prime minister.

At a meeting with the Nordic Council in Reykjavik, Iceland, on October 27, Sweden's Prime Minister, Stefan Löfven, was questioned by his Nordic colleagues about the situation in Sweden. Löfven had recently said that, "We should have the option of relocating people applying for asylum in Sweden to other EU-countries. Our ability, too, has a limit. We are facing a paradigm shift." That comment led a representative of Finland's Finns Party (Sannfinländarna) to wonder, with a hint of irony, how mass immigration to Sweden, which for years Swedish politicians have touted as being so profitable, has now suddenly become a burden.

Still, in the face of his country’s social collapse into anarchy brought on by the immigrant invasion – and specifically by the Muslim investiture of his country as an army of occupation – the prime minister doubled down on his categorical imperative: 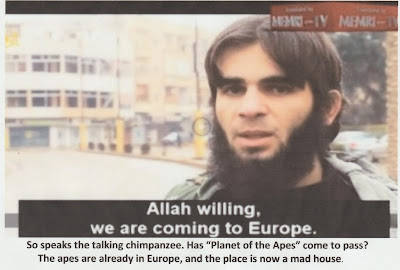 When Löfven was asked how he is dealing with the real concerns and demands of the citizenry, his answer was laconic: "Of course I understand there is concern," Löfven said. "It is not easy. But at the same time -- there are 60 million people on the run. This is also about them being our fellow men, and I hope that viewpoint will prevail."

Given the rising number of attacks on asylum centers by Swedish “vigilantes,” that viewpoint is being shredded into confetti.

The daily tabloid Expressen asked Löfven about the attacks on asylum facilities. He replied, "Our communities should not be characterized by threats and violence, they should be warm and show solidarity."

Löfven and his ilk throughout Europe – and even in the U.S. – think that by showing “warmth and solidarity” with the parasites and predators, the latter will magically become hamsters and gerbils happily exercising in their spinning wheels.

I end this column here. The massive Jihadist/ISIS attack on Paris last night, November 13th, is monopolizing my energy and attention. President Barack Obama has made a statement of consolation that sounds more like a sympathetic, almost congratulatory message to ISIS, the Muslim Brotherhood, and other Islamic terror groups. He sounded almost regretful that the destruction in Paris wasn’t wider and the casualties higher.

That’s worth another column.
Posted by Edward Cline at 6:35 AM

"He sounded almost regretful that the destruction in Paris wasn’t wider and the casualties higher." - I think the word "almost" is way too generous. He was also regretful that it was happening in France and not here. This is why he is importing tens of thousands of "Syrian refugees" over here, to make sure that he can gloat over casualties in the US - the country that he hates the most.

Lady Liberty: I stressed "almost" because Obama's speaking style is often so squirrely you can't tell what he really means. I wasn't being generous, just disgusted. He hates this country and wants to "transform" it. I saw through that in 2007.